This manual is released under the GNU Free Documentation License:

Permission is granted to copy, distribute and/or modify this document under the terms of the GNU Free Documentation License, Version 1.1 or any later version published by the Free Software Foundation; with the Invariant Sections being "About this manual", the license texts and this page, with no Front-Cover Texts, and with no Back-Cover Texts. A copy of the license is included in the section entitled "GNU Free Documentation License".

The software examples and code fragments in this manual are released under the GNU General Public License:

This program is free software; you can redistribute it and/or modify it under the terms of the GNU General Public License as published by the Free Software Foundation; either version 2 of the License, or (at your option) any later version.

This program is distributed in the hope that it will be useful, but WITHOUT ANY WARRANTY; without even the implied warranty of MERCHANTABILITY or FITNESS FOR A PARTICULAR PURPOSE. See the GNU General Public License for more details.

You should have received a copy of the GNU General Public License along with this program; if not, write to the Free Software Foundation, Inc., 51 Franklin Street, Fifth Floor, Boston, MA 02110-1301, USA.

I. An overview of the SME Server

Please note: this manual has not yet been updated for Koozali SME Server 10


Who should read this manual?

This manual is aimed at developers and provides the information they require to integrate their applications into the SME Server platform. The manual discusses the key concepts of the SME Server such as the configuration database, configuration file templates and the events and actions model which differentiate the SME Server from other Linux distributions.

What is the SME Server?

The SME Server is a software package that can be installed on a standard PC in less than thirty minutes, converting it into a complete, easy-to-use network server and firewall. The SME Server is based on the CentOS Linux server distribution, packaged in such a way that no knowledge of Linux is required to install or operate it. The CentOS packages are used unmodified, and configured automatically to emulate "best practice" from expert system administrators.

The SME Server runs on commodity PC hardware, and supports a range of configurations and devices such as:

Software for the SME Server is packaged using RPM Package Manager (RPM) system. Existing packages from CentOS and other third-party developers are used, wherever posssible. The SME Server uses the "best of breed" packages from the open source community. The design of the system allows for easy replacement of the packages if better choices become available. The current packages in use are:

The SME Server automates the best practices of a skilled systems administrator, providing a simple interface for the users and consistent, modular extensibility for the developers.

A good systems administrator knows what tasks must be done, either regularly or occasionally, to manage an Internet-connected server. Some tasks, such as backups and ensuring system security, are regular and ongoing. Other tasks, such as setting up file sharing or adding a new user, are only performed from time to time. In each case a good system administrator will not only know how to do the task itself, but also how to do it in a secure, maintainable, extensible and efficient manner, in accordance with current industry best practice.

However, not every server has a dedicated, experienced system administrator. This is especially the case in small businesses, where there may be no IT staff at all. Therefore, the goal of the SME Server is to automate the activities performed by a good sysadmin, from simple tasks such as adding users right through to backups and other complex activities, to the point where they can be easily performed by someone with little or no technical knowledge of the system.

Some Linux distributions are aimed at desktop users, general purpose server applications, or "enterprise" server applications. The SME Server is different in that it is targeted towards providing network server functionality for small to medium enterprises. Because of this, the SME Server is much smaller than many other Linux distributions, as software packages which are not needed for this purpose (for example, the X window system) are not included in the distribution.

The SME Server is also simple for a non-technical person to manage. For an end-user administering the server, choices are kept to a minimum. If a decision is very likely to be the same for all small businesses, the answer is assumed and the end user is not required to make a choice. When decisions are required, they are phrased in terms independent of the underlying technology, so that end-users are not required to be intimately familiar with Linux or Linux applications.

For developers, the simplicity is in the architecture of the SME Server system. Features are layered in such a way that additional features can be added without affecting the current services, and often without requiring modifications to the user interface.

SME Server's third design goal is extensibility, which provides a balance to the simplicity previously described. Since the simplest possible server will not suit every need, we make it easy to customize and extend the server in a number of ways.

Firstly, interfaces are provided for experienced users to customize the system from the Linux command line. These include tools to manipulate the configuration database, trigger events, or modify the configuration files for the various software installed on the system.

Secondly, applications allows developers to create additional software modules which can be easily installed and configured by end-users. Applications may provide application software for the server's users, administration tools, network services, or any other type of software or data.

The SME Server architecture explicitly supports developers by making it easy to drop software into place and remove it without needing to modify existing files. For instance, a web application does not need to edit the web server configuration file, but can simply drop a template fragment into the appropriate directory on the system and be assured that it will be expanded into the configuration file as required.

The SME Server is designed to run without intervention 24 hours per day, seven days a week. This reliability has been designed from the ground up: stable, well supported versions of the Linux kernel and applications, RAID disk mirroring, automatic firewall, and process supervision. Where applications have been shown to be insecure or unreliable, we use stable, secure replacements. The modular architecture allows this to be done without affecting the system administrator's view of the system and with only localised effect on the developer's view.

The applications are not recompiled or modified to work within the SME Server framework. Rather, the framework automates the tasks of an experienced system administrator, and configures each application in a sensible, standard way. 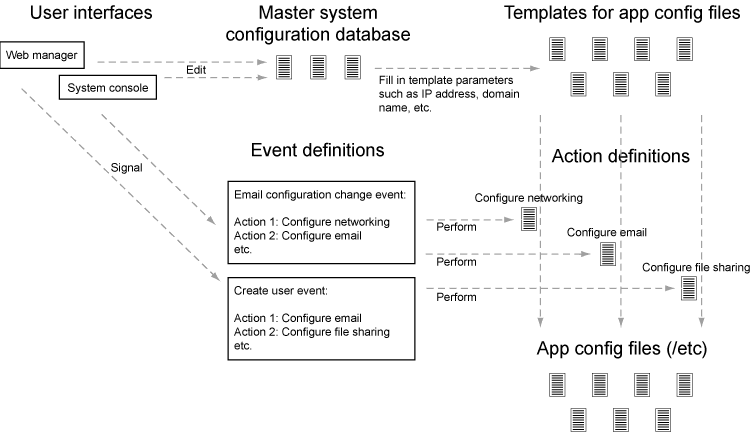 So, to recap: here are the steps performed when a system parameter is changed in the user interface (the same steps are used both for the console and for the web-based manager):