Congratulations on choosing the Koozali SME Server as your network and communications server!

Koozali SME Server is an open-source Linux server distribution designed to be:

The heart of Koozali SME Server is based on the GPL'd so open sources of the unsupported developer release of SME 7.0 alpha from Mitel, who are the copyright holder for much of what makes SME Server what it is. Mitel's commercial offering is known as the "Mitel Managed Application Server", and in the past it was originally conceived as "e-Smith". Mitel has been very generous to fund development of early alpha and beta versions and to keep to the spirit of the GPL by sharing their source code freely.

Koozali SME Server 10 is an RPM-based distribution that uses many packages from CentOS, EPEL, Remi-safe and OpenFusion: (RepoForge is now deprecated). CentOS 7 is built from publicly available open source Red Hat Enterprise Linux SRPMS and aims to be binary compatible. RepoForge is a collaborative effort of several RPM packagers that build RPMs not included with CentOS. Almost all of the packages that SME Server includes from these upstream vendors are included unmodified. The purpose of doing so is to take advantage of the stability that comes from the huge user base that uses these packages, for security, and to allow automatic updates as soon as an update is available from the upstream vendor. What Koozali adds to this solid base is easy and secure ways to adminster and manage all of it in a way that incorporates best practices and ease of use. This means that people not expert in server administration and Linux can safely manage an Internet-connected server. Security updates from Redhat/Centos should be available until 2024 for Centos 7.

This manual walks you step-by-step through the straightforward process of installing and configuring your Koozali SME Server. The Appendices and Glossary provide background information on subjects related to networking and the Internet and are intended to supplement chapters in the main section of this document.

This document was revised on the wiki at https://wiki.koozali.org/

Originally released in 1999 as "e-smith Server and Gateway", right from the start the SME Server adopted the principles that it still follows: simplicity of administration, security by default, and using proven foundations. Originally based on the free version of Red Hat, in early production it rapidly moved to version 4.0 and was widely adopted. The e-smith company was bought-in by the Enterprise communications supplier Mitel, who offered unified office servers based upon the e-smith, renamed to "Managed Application Server", and continued up to version 6.0.

Mitel later generously donated the 6.0 code base back to the community, who eventually continued with version 6.x point releases. By then development had moved to a CentOS base, the same used by Oracle Unbreakable Linux: see here. We may again opt for a new code base moving forward.

Below are listed the last few generations of Koozali SME Server still showing as in use, point releases are not included. Please note that only the latest release (v.10 pending) is supported with security updates.

Why "Koozali"? The word "Koozali" approximates to the Swahili for "rebirth"

Before that there was a long series of version 7:

Documentation has been continuously developed, and the earlier releases form the underlying basis for this manual.

The current version of Koozali SME Server has moved on a very long way from its ancestors, but still follows the same core principles.

This is the official documentation for SME Server and is endorsed by the developers at https://wiki.koozali.org/

The Koozali SME Server is licensed under the General Public License (GPL). This means that you are free to use, and alter the software. If you do alter any of the packages, you must make the source code (with patches please) freely available. The agreement is found on the ISO. Acceptance of this agreement is required during the software installation. 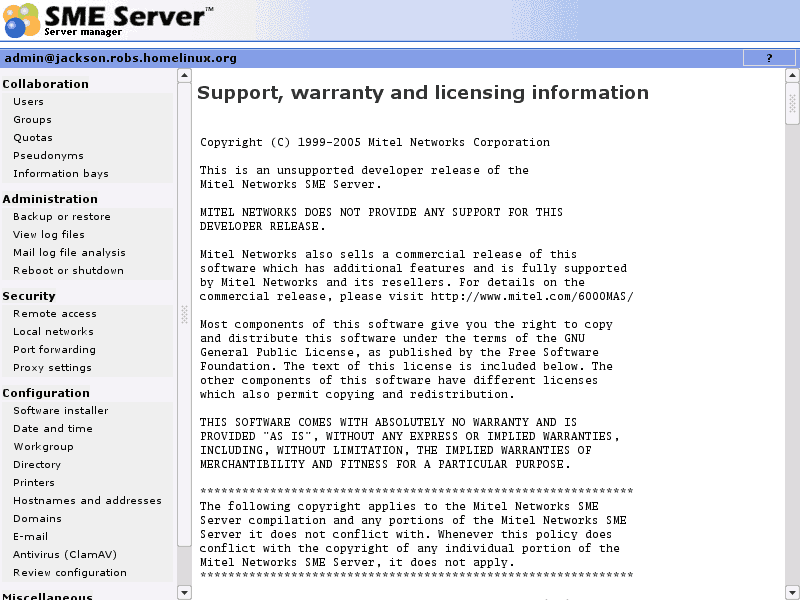 Koozali SME Server users may copy and redistribute this software. The text of the GPL license may be found at http://www.fsf.org/licensing/licenses/gpl.html. Some packages may have an alternate open source licence. The applicable license for each software module is specifically identified and can be seen by running the rpm -qiv packagename command, from the command line. Details on other open source licences can be obtained here: http://www.opensource.org/licenses/.

About Our Example Company: The Pagan Vegan

In this manual, we use examples of a catering and event-planning company, The Pagan Vegan or TPV, that configures, administers and makes use of their server. As far as we know, no company of this name exists.

For the most complete list of information about changes that have been made in SME Server, see the release notes that accompany your download.

The Koozali SME Server server and gateway installs automatically on a PC, converting it to an industrial-strength communications server that optionally allows all of the computers on your network to share a single Internet connection.

In one simple, easy-to-install package, you get: